As seen live on the tv station EWTN, singing ​at the King's Theatre in Brooklyn! 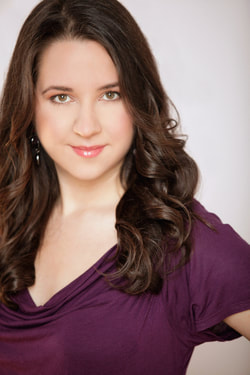 Noted for her "impressive vocal range," soprano Amy Suznovich, has performed the National Anthem for over 500,000 people live in 2021 alone for major league sports teams including Miami Heat, Orlando Magic, Philadelphia Phillies, Boston Red Sox, Miami Marlins, and Chicago Fire FC, among others. Her 2022 Anthem Season has included appearances for the Texas Rangers, Philadelphia Phillies, Miami Marlins, and Minnesota Twins Spring Training and others so far.  She was the first recipient of the Deborah Maher Award and received nominations at the Main Street Theatre for Best Leading Actress as Cunegonde in Candide and Best Female Solo for her performance of Glitter and Be Gay. She performed at the King's Theater in Brooklyn, televised live on EWTN in October 2018, as the Cantor/Soloist for the Silver Jubilee of the Magnificat with the Philharmonia Orchestra of New York and Magnificat Foundation.

Past performances included Annina/Violetta (cover) in La Traviata, Donna Anna in Don Giovanni, Konstanze in Die Entfuhrung aus dem Serail and Adele in Die Fledermaus.  In the 2017-2018 season, she performed as Gilda in Verdi in Vermont and Musetta in La Boheme with the Southern Vermont Lyric Theatre, Musetta with the Orchestra Society of Philadelphia, and as Soprano Soloist for Saint-Saens Christmas Oratorio with the Kips Bay Chorale and Soprano Soloist for Handel's Messiah with Hunterdon Symphony.

She performed as the Hungarian Opera Singer in Our Town Now at the George Street Playhouse, and originated the roles of Frenchie in A Night in the Wilde Wild West with the Baroque Orchestra of NJ, and Dr. Lipskom in Sephro: Earth's Revenge at the Philadelphia Fringe Festival. She has performed with organizations that include the Newtown Chamber Orchestra, the New Brunswick Chamber Orchestra, Queens Opera (NJ), Boheme Opera, trio@Play and Main Street Theatre, among others. Some of her signature roles include Musetta (La Boheme), Cunegonde (Candide), Lucia (Lucia di Lammermoor) and Gilda (Rigoletto), as well as Orff's Carmina Burana, Handel's Messiah, and Saint-Saens' Christmas Oratorio in the concert repertoire.

Honoring her Polish-Hungarian-American heritage, she has performed Hungarian Operetta with the New Brunswick Chamber Orchestra, the Hungarian Festival in New Brunswick, the Carousel Ball Gala for the American Hungarian Foundation and also with Csurdongolo, a hungarian folk dance group.

Ms. Suznovich is an alumni of the OperaWorks Winter Intensive, a magna cum laude graduate of Ithaca College and studies Improv at the Magnet Theater in NYC. Also active in theater, Amy has portrayed Helena in A Midsummer Night's Dream, Serenity in Mitch Albom's And The Winner Is and Rapunzel in Into the Woods at the Villagers Theatre in Somerset. She also appeared at the Access Theater (NYC) in When Words Fail as Elizabeth Swan and Helen. She performs musical theatre improv regularly online, creating fully improvised musicals as part of Team Punk (Magnet Theater) and Sotto Voce (Socially Distant Improv).

​Highly sought after as a soloist for weddings, private parties, wedding anniversaries and other special events, contact Amy for more information about rates/availability.
Contact Amy Here
Download Press Kit Below: